Keyboards come in all shapes and sizes and have various makes designed for specific uses. Your standard office keyboard bears the standard keyboard technology and often doesn’t have anything too fancy going on. 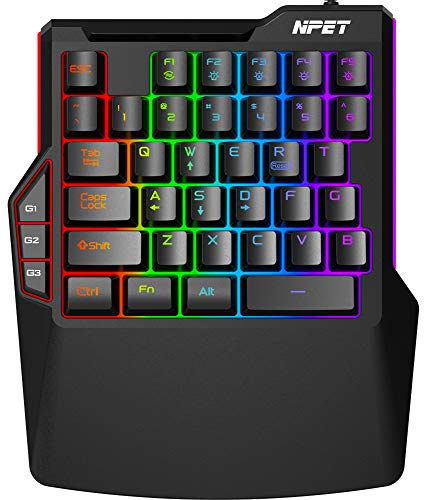 This one-handed keyboard, the NPET T20, is a useful tool for any gamer who is looking to be more economical with their deskspace while not necessarily losing functionality.

The one-handed keyboard is a membrane keyboard that features 38 keys that are deemed essential to gamers. These include the F1 through F5 keys, numbers 1 to 6, and all other keys on the left-hand side up until the letters T, G, B, and the Spacebar.

Plus, you’ll have access to three programmable keys on the far left – G1, G2, and G3. These three keys can help make up for some of the missing keys you might have felt you needed. It features an ergonomic palm and wrist pad that can help offset the fatigue that might come from long gaming hours.

In terms of features that were undesirable and that we felt were missing, there are a few complaints. As a cheaper model, the materials used also feel cheap and flimsy. The downloadable manual is also inaccurate about some of the shortcuts. While the keyboard may feature many options in terms of backlighting, it is limited in performance and customization. 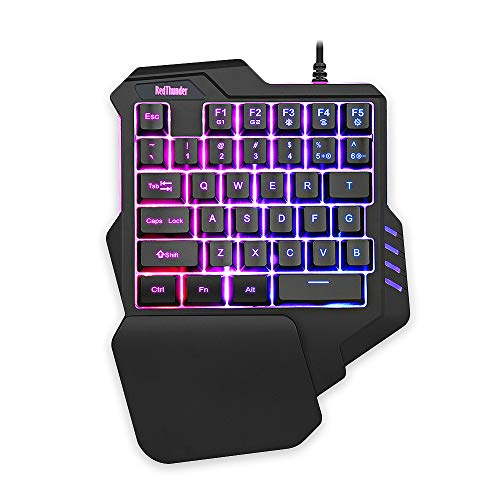 Similar to the previous one-handed gaming keyboard on this list, the RedThunder takes a different aesthetic approach that many might prefer.

With a uniquely chunky yet ergonomic design, the RedThunder is meant to cater to gamers who want the fastest response times possible without compromising space or comfort. Featuring a large wrist rest at the base of the 35-key keyboard, you can be assured that everything is compact and easy to reach.

The built-in game chip increases response times by up to 3ms for a more fluid and responsive gaming experience. The keyboard does not feature any additional programmable keys, but by using the Fn key in conjunction with the F1 and F2 keys, you can access two recording macro keys. Fn + Esc starts the recording, as indicated by the flashing backlighting.

You can then record your keystrokes and use Fn + F1 or F2 to end your recording. It is a small and portable design that connects via USB with RGB backlighting with two modes and seven colors. It is simply plug-and-play and is compatible with all modern systems.

Features we felt were lacking were the lack of additional programmable keys, which have instead been mapped to default keys. This leaves less room for customization of macros on your part as the user. There is also a lack of a Windows key, which is more user-specific but is widely used by many for troubleshooting. 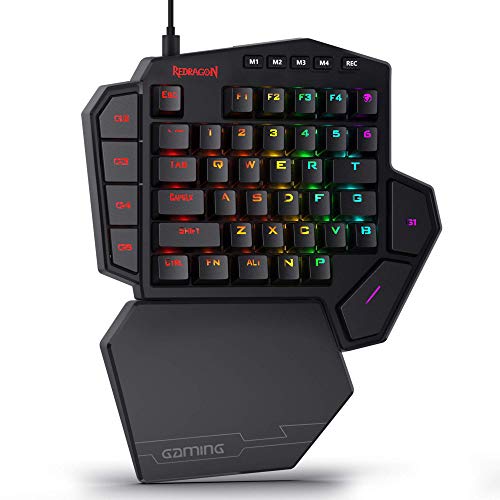 Made by the ever-popular Redragon, this one-handed gaming keyboard could be set to be the best on this list, as most Redragon options tend to be.

The K585 model is designed to be a slim and efficient model that cuts down on all of the useless keys and brings it down to just what you need by bringing together all the most commonly used keys together. As a mechanical keyboard, it also has incredible response times and textile feedback to ensure every keystroke is satisfactory.

The keyboard possesses 42 keys in total, seven of which are programmable macro keys that can be found on the left and right of the main keys. Aesthetically speaking, the keyboard bears the familiar Redragon polygonal design with an ergonomic wrist pad jutting out from the bottom, which can be attached and detached.

Additionally, there are five different RGB backlighting modes with a selection of 16.8 million colors to customize from. The backlighting and keyboard functions can also be edited and customized through software, which is the first of its kind that we have yet to see on this list.

In terms of missing or unwanted functionality, there isn’t much to complain about. This is a genuinely fantastic one-handed keyboard that caters to the needs of every gamer. Very few other one-handed keyboards can be considered better, and you might even be able to compare this keyboard to full-size options.

If anything, you might be able to critique the chunkier nature, as not everyone likes larger builds. Additionally, the wrist pad is made of plastic instead of featuring any padding, but it is also detachable, so you could swap it for another. 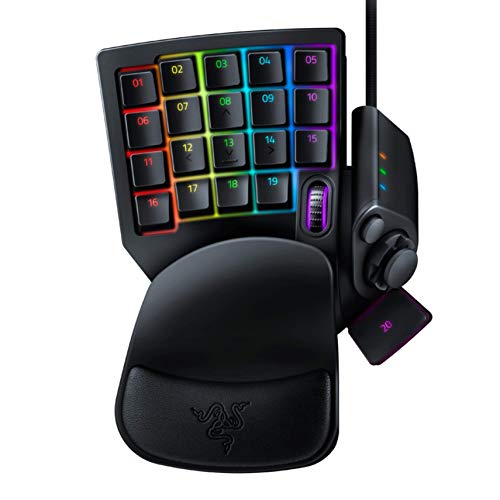 Not necessarily a one-handed keyboard, this gaming keypad is still designed to provide gamers all that they need to game comfortably. What it lacks as a keyboard it makes up for as a gaming device.

Entirely different from any other gaming keyboard, this one-handed gaming keypad doesn’t possess the standard half QWERTY keyboard. Instead, it has 19 keys running from 1 through 19, with the keys 8, 12, 13, and 14 acting as the directional arrow keys.

A scroll wheel is built into the pad next to the 19th key, and an analog stick and 20th key are found on the right-hand side. The gaming keypad is finished off with a comfortable padded wrist pad that comes with the Razer logo etched into it.

The keypad uses a mecha-membrane setup for increased response times and better tactile feedback without causing too much of a distracting sound. All the keys are also programmable for additional customization through macros.

Finally, the gaming keypad is fully synced with all popular games and other Razer hardware and software, with full RGB backlighting support through Razer software to access the 16.8 million color spectrum for individually backlit keys.

As a Razer product, you will have to deal with their infamously poor customer service. Additionally, there is also the issue that it isn’t a keyboard, and you will require an actual keyboard when not gaming. 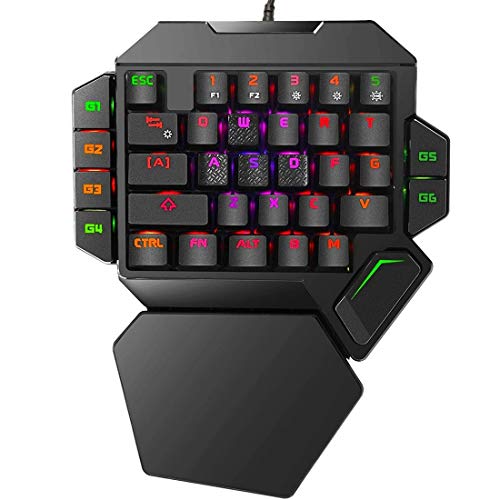 Returning to more conventional one-handed gaming keyboards, this product by Cakce is lesser-known but still has many of the features one would be looking for in a gaming keyboard.

This one-handed gaming keyboard features 35 keys with six programmable macro keys (G1 through G6). The keys are all programmed to be anti-ghosting with key rollover to prevent any conflict, and they are backlit, with access to five different backlighting modes and seven colors.

The backlighting is controlled with shortcuts and macros, so it is a bit limited. The keyboard also has a plastic wrist pad for an ergonomic design, with the WASD keys textured differently for convenience. As a mechanical keyboard, you can expect faster response times and tactile feedback.

As for the downsides, there are two main let-downs. The first one has to do with the programmable macros. There is a distinct lack of compatibility with other keyboards, meaning that you can only program those that could be used with this one-handed keyboard when you program macros.

Macros that involve keys from the right-hand side of the keyboard will be useless. Secondly, the mechanical aspect feels very clunky, with the keys having too much resistance and too loud of a noise for some.

In conclusion, we recommend the Redragon option as an excellent standard one-handed keyboard, as it offers very high quality and is even comparable to full-size keyboards. As a budget option, we could recommend the NPET T20, which is less expensive and while it feels cheap it can still serve its purpose well.